This post is about teaching kids how to apologize. Sincerely. Not a, “Sorry, but….!” A real, genuine, sincere apology. A skill that will serve them well in life because let’s face it, we all mess up. 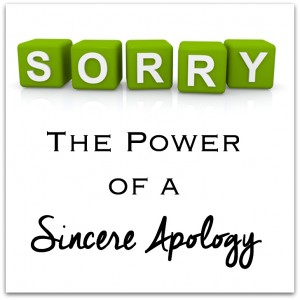 Recently I was chatting with one of my best girlfriends and she shared a story about something that happened with her middle-school aged son.

Her boy is a great kid. Super smart, responsible, good sense of right and wrong. The kind of kid that you just adore. But he, like all of us do from time to time, messed up and got in trouble in class.

How she handled it was so impressive I had to share.

Seems as if he was talking a bit too much with the kid next to him and his teacher got mad and gave him a recess consequence.

He’t not the type of kid who is used to getting in trouble, so to him this was a very big deal and he was MAD.

He was mad at the kid who was talking with him, mad at his teacher, and in the mode of misplacing the blame and justifying all the reasons why he didn’t deserve to get in trouble.

His mom, instead of blowing it off or saying ‘kids will be kids’, or  just do your recess consequence and get it over with had a conversation with him about taking responsibility for HIS actions.

She told him the only thing he could control in this situation was how he reacted to it.

She said once he got his head around accepting responsibility for what he did to get the consequence, he was really disappointed in himself and didn’t know what to do.

She explained to him,

“When you mess up, the very best thing you can do is to give that person a sincere apology.”

So, her son emailed the teacher to ask if he could talk to her at the break before class the next day. That night he planned out what he was going to say and put some bullet point thoughts on paper. Namely,

* I am so sorry for talking in class.
* I feel very badly for not respecting your time.
* I am aware of my mistake and it won’t happen again.
* I am concerned about my citizenship grade and hope that this will not affect it. If it will, what can I do to make things right?

My friend said the teacher was surprised by his apology, and of course graciously accepted it.

He came home that day like a weight had been lifted off his shoulders.

There really is so much power in a sincere apology. Instead of letting it fester inside, there is something so freeing in admitting wrongdoing and expressing remorse.

Teaching Kids How to Apologize

We all mess up.  Kids, adults and everyone in between.

I think he hit all the main points on the head on how to make a sincere apology.

1. He took responsibility and showed awareness of his mistake (no blaming someone else or no “buts”!)
2. He expressed remorse.
3. He expressed an effort to not do it again.
4. He asked for forgiveness –  or what he could do to make it right.

I love my friend for sharing this story with me. These types of lessons will be lifelong ones for kids. She gets an A+ in this life lesson.

Anyone else want to chime in with your thoughts on teaching kids how to apologize? Sincerely?