How to Make a Child’s Scarf for Cheap!

This post is about how to make a child’s scarf for cheap. Let me preface by saying I am not much of a crafter or DIY type of person and I was shocked at how easy it was to make an inexpensive fleece scarf for kids so I am very excited to share it with you.

It started with my daughter (who loves her accessories) complimenting her best friend on her fleece scarf. The friend’s mom told me her mother-in-law made the scarf, and upon further investigation, I saw that it seemed pretty simple to make because it was one long piece with simple cuts at the end for the fringe.

So one afternoon the girls and I ventured to Joann Fabric to check out the options. You can pull up Joann’s coupons like this on your smart phone and they will scan it in the store. Sweet.

When we walked in we immediately saw a whole wall of no-pill cozy fleece fabric. Incidentally it was all 50% off. Double sweet!

I had no idea how much I had to buy (I have never really bought fabric before – GASP), so I took it up to the associate to ask the minimum amount I could get which was a 4″ strip.

We measured the scarf my daughter was wearing at the time, and decided a 7″ strip would be about enough.

He cut off a piece of the 7″ fleece and then gave me the ticket to take to pay for it. It was, are you ready…

My jaw dropped. So, of course we had to go back and pick another fabric, which turned out to cost a whopping $1.07, along with some UCLA Bruins fleece to make matching scarves for an upcoming basketball game.

When we got home, we got out scissors, placed a line of Scotch tape to use as a guide, and my daughter spent a good hour carefully cutting strips to make fringe at both ends.

When done with the fringe, we tied individual knots at the top of each one to keep it from fraying or splitting. She wore her new scarf the next day to school and she was SO excited to tell her teacher she made it.

She told me, “Mommy! Making your own scarf is not only cheaper, but it’s a lot more fun!”

This is such a cute winter day activity to do with your girls.  Would also be fun to do as a craft for a birthday party for older girls.  I am sure you could also get creative with beads and embellishments. 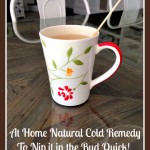 Because There is Simply No Time to be Sick 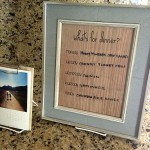 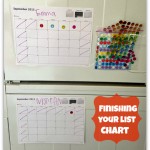 A Getting Ready for School System for Stress-free Mornings 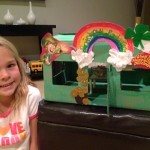 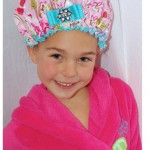